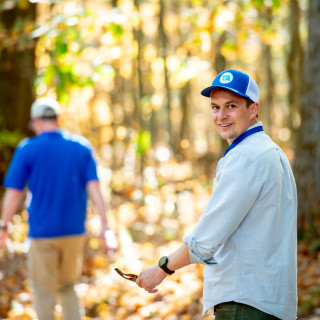 Luke Teschner, a Thetford Academy math instructor, has combined his passion for fitness with his desire to bring Thetford colleagues together, creating a Run/Walk/Snack group.  “It is a simple concept but one that no one had headed up since I’ve been here at Thetford Academy,” said Deb Sanders-Dame, one of his colleagues. “Luke announced it at a faculty meeting and sends weekly reminders to the staff. He welcomes runners and walkers of all levels to gather near the gymnasium after students are dismissed for the day. We walk or run on Thetford Academy’s trails for about 30 minutes and then gather for a snack and time to visit. People usually hang around for another 20 minutes and we rotate who brings the snacks each time. While the number of people who participate fluctuates depending on the week, this simple but quite effective idea has resulted in a core group of people who would not have in the past normally hung out together after school.“

Before the pandemic closed the school buildings, Teschner often brought his pre-school aged son along for the Run/Walk/Snack weekly get together. “His preschool is right next to Thetford Academy,” said Teschner. “Last year I would go get him after school and bring him up so that I could run with him in the stroller. He would always look forward to coming along!”

Outside of teaching math (which he finds relaxing, rewarding and enjoyable), Teschner is committed to engaging in plenty of fitness training. “While I prefer running, I am now in training for triathlons,” he said. “Though I'm relatively new to the triathlon scene. I competed in the New London Triathlon (summer of 2019) and one virtual New England Triathlon series. I find the three sports to be complimentary for staying fit and active, especially during the summer. “

“Ultimately, I am looking forward to competing in an Iron Man, whenever they return”, Teschner said. “I purchased a wet suit recently to ensure that I can continue to swim until late October or early November. To re-fuel after a work-out, my favorite snack is protein- fortified milk with powdered peanut butter.”

And with that, rock star, Luke, and his colleagues, armed with water bottles, headed out on the Thetford Academy trails for their weekly walk/run.  It was a spectacularly colorful and warm fall afternoon.