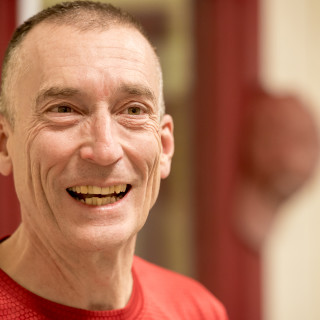 Lieutenant Colonel Donald Singer, Spaulding High School’s JROTC program director, lives and breathes all the traits of a VEHI PATH Thriving Rock Star. “He leads by example,” said Elizabeth Bicknell, one of his colleagues.  “He does not just ask students to do something, he shows them how to do it.”  As an example of this he quickly shimmied up the rope in the wrestling room gymnasium while we were visiting.  “Don runs with the track and cross-country teams and does it with so much empathy and heart,” said Bicknell.  “He spends time outside of work taking the cadets to events.  Don has a great sense of humor, treats everyone equally and is unassuming.  He always volunteers when he sees what needs to be done.”

Multiple medals from marathons and half marathons line one of the walls in his office. “I have now finished 41 marathons in 27 states,” he said proudly. “And now my goal is to run one in every state.  My interest in running marathons began in 1990 when I was on active duty in Quantico, VA and encouraged to run the Marine Corp Marathon.  After completing the marathon (with next to no training) I decided I could certainly do much better if I dedicated time for training.”

Gretchen Singer, one of his three daughters, popped in his office while we were there.  She described her father as determined, delightful, daring and dedicated.  When Gretchen was 16, she accompanied her father and one of her two sisters on a cross-country bicycle trip.  “We started in Portland, Oregon and averaged 75 miles a day,” Singer said as he shared a detailed map and a scrapbook of photos highlighting their journey.  “We did our best to incorporate some sightseeing too, visiting Yellowstone National Park, Mt. Rushmore and Niagara Falls.”

Singer also shared a few other highlights of his career and his life with us.  “I am a retired Army Lieutenant Colonel and previously worked in Germany, South Korea and Kuwait. Before coming to Spaulding High School’s ROTC program, I taught classes at Norwich University.  I have proudly worn a uniform for the past 30 years,” he said.

Don has several items on his bucket list he has yet to address. “When I retire, I will have more time to train and plan on competing in triathlons,” he said. “I also want to cycle through Europe and hike the Appalachian Trail. Right now, my wife and I are in the process of cycling on a tandem bicycle to each of Vermont’s 251 towns,” he said smiling.