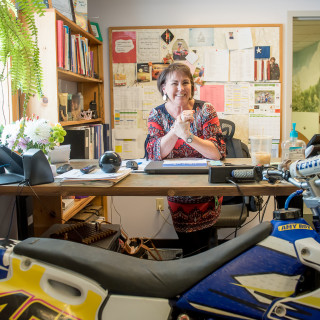 Amy Roy, Benson Village School’s principal, is constantly on the move, inside and outside of the school.  “I live four miles from the school and often cycle here on my mountain bike,” she said.  Cycling, however, is not the only athletic endeavor that keeps her charged. “I have been an avid dirt bike racer for 24 years,” she said as she pointed to her dirt bike and helmet gracefully positioned in her office. “It all started when I moved to Colorado after graduating from UVM and began competing in mountain bike races. Before long I was introduced to dirt bike racing and fell in love with the sport and Chris, the man who became my husband,” she said laughing.

1998 was a huge year for Roy, competitively and personally. “I won the American Motorcyclist’s Association (AMA) award for the RMXA Colorado State 3rd place Women’s Novice division and Chris and I were married at the Sam Boyd Arena in Las Vegas at the Super Cross season closer. I wore my wedding dress in the race and we had an Elvis impersonator.” “The AMA racing award makes me legit with other dirt bike racers,” she said holding the award in her hands. “I am not that far out from my moment.”

Also while in Colorado, Roy obtained her teaching license and began teaching in the local schools. Longing for more reasonably priced property, however, she and her husband determined moving to Vermont would give them that opportunity. “I was hired for a teaching position in Whiting, we purchased property and built a dirt bike track behind our home,” she said.

Pam Arel, Roy’s administrative assistant, described Amy as a force of nature. “She is an amazing bundle of energy. I have worked with several administrators over the years in different schools. Amy has changed the face of this school by being team oriented and promoting the morale of the staff,” Arel said.  Roy countered saying, “It was like lightning in a bottle.  I arrived two years ago to a mostly new teaching staff and we started from scratch. We culled things no longer needed, installed air conditioning and purchased new flooring, lighting and curtains.”

Roy uses a standing desk that her husband built for her and she purchased one for Pam as well.  “We aren’t sitters,” she said. On her desk sits a Magic Eight Ball. “I often use it to gather answers to questions.  It tells it like it is,” she said.

"Amy motivates everyone around her to do their best and she inspires me,” said Jessica Thurston, a Benson kindergarten teacher. “She is a natural leader and is someone we all can rely upon and turn to for advice. She provides both sides of a situation and doesn't sugar coat anything.  She makes choices that are best for our students and staff.  She tells staff that family comes first and stands by it. She regularly reminds us that to take care of our students we must first take care of ourselves. Amy takes care of herself and promotes others to do the same.”

Roy’s energy is pervasive. "My son, now a high school senior, is also an avid dirt bike racer and is doing quite well competitively,"  she said.  “We breed speed is our family’s hashtag,” she said. “Our family really enjoys spending time together, snowboarding at Pico during the winter months." Roy has recently been spending time with girls from a local Brownie troop. “I want the girls to hear about what’s possible for them and how they can strive toward respecting themselves,” she said.