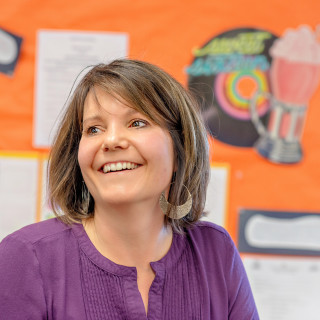 Lisa Pepin Robtoy, Enosburgh Elementary School teacher, is according to her colleagues, a rock star extraordinaire.   “No matter how big or small one’s health goal, be it drinking more water, finding more time for themselves, running a 5K for the first time or getting age-appropriate health screenings, Robtoy is there armed with encouragement to bolster success.  She might send you an email spurring you on or perhaps gift you with a water bottle.  She might run or walk with you before or after school, or bring in a slew of healthy recipes, books and suggested apps,” said Merry Ellis and Jennifer Carpenter. “While fanfare is really hard for me, I do try to motivate others,” said Robtoy.  She’s avidly committed to participating with pals, Heather Beauregard and Carpenter, in VEHI PATH’s annual peer coaching course. “We love the peer coaching assignments, especially the focus on goals and reflection. The course forces you to look at yourself as a person and how you treat others and it requires you to focus on the positives rather than the negatives, “she said.  Now in her 23rd year at the school, Robtoy does her best to promote health and prevent disease among the staff.  Serving as a VEHI PATH wellness leader, she recently organized a paint and sip party, without the sip.  She describes herself as very protective of the staff. “When things are headed south in staff meetings, I often try to right the ship again by suggesting ways to rework statements so the staff can leave with dignity and on a positive note,” Robtoy said.

Outside of school, she thrives on long distance runs with her two running partners, and she enjoys competition and taking on new fitness-oriented challenges.  She likes stacking wood, planting tomatoes, cycling, Nordic skiing and snowshoeing. Robtoy described herself as a data guru.  “I love to collect all kinds of data and I use my Fitbit to record my steps.”   As we bid our farewells, Robtoy opened up a Go Noodle video and invited her students to stand up and follow the movements to the music playing in the background.  Everyone was having a grand time.