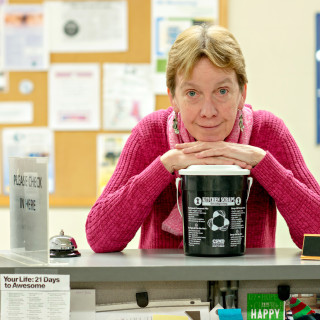 Diane Kinnon, aptly known as South Burlington School District’s ambassador, is the first person one interacts with when they enter the district’s central office at the Tuttle Middle School.  For many student teachers and new hires, Kinnon’s calm demeanor is a blessing.  According to her colleagues, she excels in her ability to be welcoming and is quickly able to de-escalate potentially stressful situations.

Originally from Quebec, Diane has worked in public schools for the past several years, first at Bellows Free Academy in Fairfax.  While working in Vermont schools, Kinnon made a personal commitment to obtain an undergraduate degree and then a graduate degree in community mental health. To achieve this goal, she spent many an evening attending classes and at one point, also held an overnight position in the mental health field. Eventually after two frightening episodes, Kinnon realized attempting to keep her fires burning 24 hours a day was far from safe or healthy and set up a more manageable schedule.

Kinnon describes herself as an avid gardener and composter, stating that she was years ahead of others in practicing recycling and composting.  “I’m on a first name basis with all the recycling and composting facility personnel,” she said. Kinnon, who grew up in a rural community on Ile-Blizard, an island near the western section of Montreal, Quebec, had her share of challenges as a child. “There were no schools on the island so we had to travel by bus off-island for classes. Every morning we would get on the bus at the various stops. When the bus arrived at the bridge to the mainland, however, we all had to disembark and walk across the bridge because the bridge was in such disrepair. The bus driver drove the empty bus across the bridge and waited for us on the other side. My friends and I spent many a day maneuvering through all the potholes and open bridge sections,” she said.

Kinnon’s upbringing is serving her well today.  She presently participates in the Vermont’s Home Share program and is having a ball. “I live with an elderly Quebecois woman and help prepare her meals on a regular basis,” she said.  “Because I speak French fluently we have lengthy and wonderful conversations in French.” Kinnon eats plenty of veggies and proteins. Her only vice is one serving of potato chips or exactly 13 each day.  She regularly walks five to ten miles at a time and enjoys cycling lengthy distances.  Her Subaru Outback, holds her bicycle perfectly inside, should she choose at the drop of a hat, to take an unexpected spin.