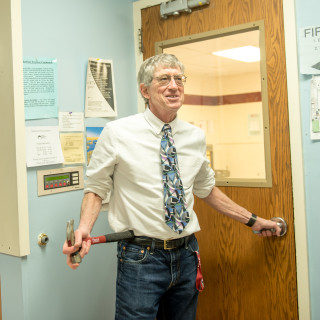 Can you explain again who you are and why you need me?,  asked Fred Griffin, a BFA Fairfax faculty member when I contacted him about a VEHI PATH rock star interview and photographs. “I'm a little old man from a small school near the border.”  With that description in mind, I was totally unprepared when he strode into the school office, armed with a hammer and a stack of old textbooks. “Let’s go,” he said as Karen Pike, our photographer and I tried to keep up with his pace.  “My students and I need to raise the power cord for the portable heater in our new greenhouse so the food delivery trucks don’t pull the cord out by mistake. “ And with a small group of high school students joined the entourage outside on the steep hillside where the greenhouse was located.  Though their first attempt to raise the cord was far from perfect - the bracing pieces of wood fell in a heap and scattered down the hillside – Griffin provided few possible solutions, allowing the students to experiment with possible solutions.

According to his colleague, Carol Stanley, Griffin is determined to involve students in a variety of outdoor adventures and healthy practices including cross country running, Nordic skiing, ultimate Frisbee, cycling and canoeing.  He coaches the school’s cross country ski team though he, himself did not take up skiing until he was 38 years of age.  “We have the only team in the state that provides equipment to all the students, free of charge,” he said.  Griffin has worked with multiple community groups to develop the walking and cross-country skiing trails used by many people within our school’s property and in the adjoining privately owned forest.  “Fred is a passionate believer in health and wellness for everyone he interacts with.  No one else can compare to his zest for life. He shares vegetables form his garden harvest each fall and has now spearheaded the School Farm to School endeavor – teaching a new high school course and applying for and obtaining grants for the garden’s construction, seeds and a shed,” Stanley said.

Griffin does have enormous plans for the new school garden.  “In addition to growing kale, garlic and lettuce, we will have an apple orchard, berries and chickens, honeybees and construct two bridges,” he said.  Griffin is far from a newcomer to the gardening.  “I have a 4000 square foot garden at home,” he said.  “There are only two seasons –cross country skiing and gardening and luckily they overlap.”   In addition to all else Griffin is involved with, he is the high school’s English instructor. A collage of objects hangs from his classroom’s ceiling.    “These objects all have meaning and are associated with specific stories from past and present students,” he said.   His students participate in Vermont Writes, poetry slam events.  “The focus this spring is to get students involved in exploring Judevine, David Budbill’s play about a fictitious Vermont poor town of incredible beauty and hardship.    When asked to describe Griffin in more detail, his students said,   “Fred,” as they freely call him, is very approachable, always willing to listen and provide a bit of guidance. He is like a superhuman rock, has tons of energy and tells us to look the gray rat (fear) right in the eye. And he expects plenty from us.”