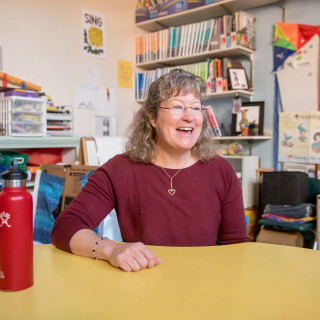 “Catherine O’Brien exemplifies the definition of wellness and is a rock star extraordinaire,” said Danielle Locke, her colleague in the Fletcher school classroom on the day we visited.   “She is a powerful role model who has demonstrated how valuable making good choices and taking care of one’s health can truly be.  O’Brien has been an integral part of the Fletcher school community for the past 24 years and in the classroom she instills an environment for learning for all,” said Locke.   “She engages her students in practicing mindfulness activities, yoga and a variety of other fitness routines to help them succeed socially, emotionally and academically.  “I do lots of exercises in school with my students because I know it helps their brains,” said O’Brien. “And as a result, several parents are supporting more movement for their children. “

O’Brien has served in various capacities; first as a kindergarten teacher, then as a first and second grade teacher and this year she is working with kindergarten students once again.  “There was never any question about my career, “O’Brien said as she laughed. “I knew I was destined to be a teacher because I’m surrounded by family members who are teachers.”

At three years of age, O’Brien received a diagnosis of Type I Diabetes.  “Though in my youth, I ate what I wanted, I now focus on eating foods low in fat and fiber and have become quite invested in fitness.  For a long time I had put myself on the back burner and was not taking care of myself,” she said.  “Eventually, I recognized that had to change because as a diabetic I need regular exercise to regulate my blood sugar.”

Her foray into fitness began with a Jazzercise class.  “I was extremely apprehensive about group exercise classes,” she said reminiscing.   “Now, I love them and am a big part of the Peace of Mind Pilates studio in Essex that one of my good friends owns.  I clean the studio and teach some of the classes.  Three to five times a week I participate in Pilates, Barre, TRX and yoga.”  In the warmer months, you might find O’Brien on a paddleboard practicing yoga poses or standing on her head.   “I like being upside down,” she said.  O’Brien is anything but upside down most of the time.  She’s moving throughout her classroom and is available to serve as a resource for staff seeking guidance about improving their fitness and reducing their stress.