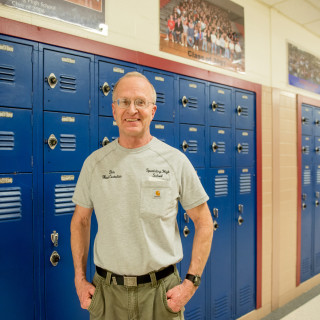 Don Lessard has been walking the Spaulding High School and the Vermont Career Center halls for the past 44 years, first as a high school student and then shortly following graduation, as the school’s custodian.  A quiet, reserved individual, Lessard is determined to ensure the school buildings are in tip-top shape, the faculty and student requests are addressed quickly and that he remains healthy.  “Don Lessard is not only a rock star, he could be the entire band,” said Elizabeth Bicknell, one of his longstanding colleagues.   “He regularly does the work of two and sometimes three custodians.  In fact, add a few more locations such as our supervisory union office, our alternative locations -the Granite Academy, ACT and the Phoenix programs- and you will get an idea of just how busy this guy truly is.”

Though Lessard’s daily job is, in and of itself a significant workout, he doesn’t shy away from activity outside of his work responsibilities. He jogs, lifts weights regularly and spends plenty of time in his gardens. “Once upon a time, I used to run up and down Camel’s Hump,” he said grinning.  According to Bicknell, Lessard grows his own veggies and fruits and shares them with other others anonymously. “If his pear tree is laden with fruit, a bowl of fresh off the tree pears will appear in the teachers’ break room.  In the summer we enjoy his excess blueberries.  “And if you catch him snacking it will probably be fresh fruit or yogurt.”

“Every student who stays after school for sports or extracurricular activities discovers that Don is their go-to person when they need anything,” Bicknell said.  “His positive attitude makes him very approachable to everyone. He does it all with a smile and never complains. Teachers leave him notes asking him to move a cabinet or to replace a broken chair and voila the next day the task will have been addressed, with no fanfare”. Lessard is considered to be the guardian angel of the drama club.  This year he is assisting with the lighting for the Sound of Music production; several years ago, he was responsible for making Peter Pan fly.

Lessard has no intention of slowing down anytime soon. “I enjoy my job and the students,” he said.   Over his lifetime, he has traveled all over the United States, including Alaska and has made visiting state and national parks a priority.   “Our school community is very lucky to have him and we want you all to know it,” said Bicknell.  Rock on.