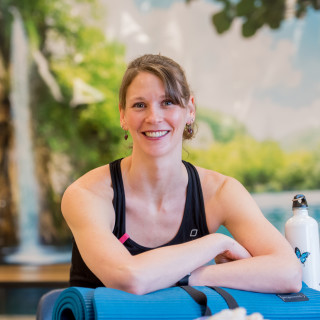 Under Rebecca Emerson’s quiet demeanor with her Twinfield kindergarten students, is a woman brimming with unrelenting determination and self-confidence.  “Rebecca has been a motivator since day one.   She leads staff work outs after school. She organizes a hiking group throughout the year wherein staff can choose from multiple mountains to tackle,” said Alyssa Hutchins, a former colleague.  “As well, she encourages her students and staff members to make healthy food choices throughout the day.

Outside of the classroom, Emerson is very physically active.  She runs on back roads and is training for a half marathon, cross-country skis and snowshoes.  She has a workout room in her home. Emerson’s keen desire to hike in Vermont tied in nicely with this year’s VEHI PATH’s Free to Be Me Adventure. “My favorite trail is from White Rock to Hunger Mountain,” she said.

In her classroom, Emerson has introduced mindfulness activities to her students making use of audiotapes to encourage restful breathing and relaxation. And with her colleagues, Emerson leads a variety of workouts to support core strength, flexibility and fitness. “Music is another one of my passions, especially playing the flute,” she said.  “I began teaching flute lessons to students while I was in high school.”

In 2003, Emerson experienced what she defined as a pivotal event in her life. “Because of this I need to continually build up my endurance and strength,” she said.  “While vacationing outside of the United States, a man broke into my room, sexually assaulted me and attempted to kill me,” she said.  “Eventually I was able to run to the bathroom and lock the door.  He continued to pound on the door and when he couldn’t get in, he rummaged through everything in the hotel room.” It didn’t end there as Emerson then had to get herself off the island and back home to Vermont.  When her assailant was caught and prosecuted she had to return and testify about the assault, a harrowing experience.

“As a result of what happened to me several years ago, I have chosen to become a stronger person,” Emerson said. “I have shared my story with the Vermont legislature and repeatedly with Vermont Police Academy students. I want law enforcement officers to better understand how to communicate with and care for victims of assault,” she said.  I have also created a company, focusing on providing information about how to prepare for safer travel when traveling outside of the United States.

When I asked Rebecca to describe what animal she might best identify herself with, she replied,  “Since the assault, I have always had a connection with butterflies/dragonflies probably because they represent new life, a sense of calm, light and airy and happiness, but they also have to endure some pretty terrible hardships as they float through life.  Yes their lifespan isn't very long, but the time they are here on earth is a time of love and happiness.  I hope to always remember the happiness in my life even though I've been dealt a pretty tough hand.”

We applaud you, Rebecca, for: sharing your story, your bravery and for your commitment toward a safer, healthier and more respectful world.