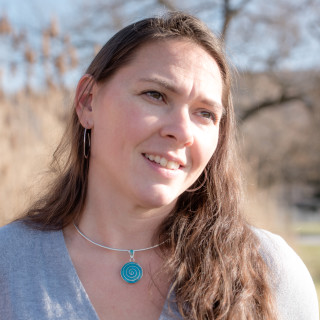 “Randi Lynch is a wonderful giving person and a rock star in the community,” said Jen Burt, who works at the Maple Run School District office in St. Albans and is also Lynch’s mother.  “Randi supports a special education student in drama and in three sports through the Unified Kids program.  She volunteers and bakes for local gatherings and fundraisers filling most of the hours in her day with activities.  For example, one weekend last fall she baked for a fundraiser for an accident victim, attended a Rise VT square dancing event and then attended a pre-race class focused on training for the 14th Star half marathon.  Then she went to shadow the student she works with at a cross country running meet, took in a play in Hyde Park (proceeds from which went to Meals on Wheels) and on Sunday attended another race class, paddled 13 miles on the Lamoille River and finished it up with a hike to Sterling Pond with a friend.”

Lynch returned to Vermont after spending several years living and working in New Hampshire.  “I have degrees in behavioral psychology and communication,” she said. “I find helping students with social pragmatics, (the way in which they learn to use and adapt language for different purposes) extremely inspirational. “

Lynch’s love of the outdoors, engaging in athletic feats and riding horses is fully alive.  “In high school I was on three varsity sports teams,” she said.  Now, as a Maple Run district employee, Lynch has full access to the Collins Perley sports arena.  “I do high intensity training and Zumba four or five times a week,” she said.  “Since being back in Vermont, I have made lots of friends through the sports complex and we often hike together. Hiking is one of her Lynch’s passions.  “I have hiked all the 4000 foot Vermont mountains, climbed Mount Mansfield four times in one year and Mt. Washington once. My next goal is to climb the 48 4000 foot mountains in New Hampshire,” she said.  Though Lynch was never a runner, she has set a goal to accomplish a marathon.

Randi and Jen live together on 13 acres in Sheldon where they walk, ride horses, play with their Australian shepherd, go to the park, garden and farm together.