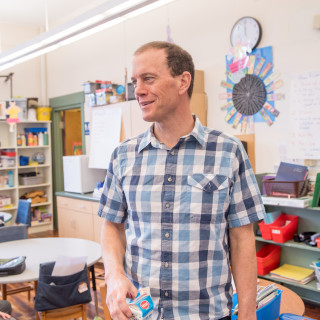 Tom Thurston, Thatcher Brook educator and prolific Nordic skier and marathon runner, is profoundly committed to building and sustaining a community of fit and healthy Waterbury youth.  And his passion for making this happen certainly shows. “Waterbury’s cross-country ski program and the 4th of July race have become staples in our community”, said Carol Baitz, Thatcher Brook’s physical education instructor.

Now in his 20th year of teaching at Thatcher Brook, the Nordic ski program is fully developed for children of all ages.  In the school’s basement, Thurston showed us the cross-country ski equipment room which was lined with multiple skis, boots and poles all specifically organized by size. “I bought a used snowmobile to groom trails around school,” he said pointing out some of the trails.  “There’s a trail down by the river and more trails across the road.”

After school during the winter, Thurston takes the older students to Trapps Nordic Center in Stowe and to the Range in Underhill for more strenuous Nordic skiing.  “We had 72 students up at Trapps over an 8-10 week period this season,” he said.

Thurston pays for the equipment and bus travel with the funds raised from the annual 4th of July Mile Race that takes place before the annual parade.” We have about 300 runners each year,” he said. “Children are encouraged to participate and in advance our students make the medals that we distribute to the runners at the race’s completion.”

Thurston is no stranger to athletic competitions. “As a teen, I was an Alpine skier but switched to cross-country skiing in college, he said.  “And I competed as a bicycle racer before becoming a teacher.”  This year, Thurston aims to help runners make their 3:15 pace at the Vermont City Marathon; not too shabby a goal.  “I like to give something back and encourage people,” he said.   He was out skiing 106 days this winter, beginning at the Montmorency Forest in Quebec which annually opens in late October.  “I took my family with me,” Thurston said.

“Long distance running is incredibly peaceful and mindful,” Thurston said.  “ Solutions about how to  pay the mortgage, deal with a car that needs repaired or best help one of my family members come easy when you do that much running,” he said beaming.