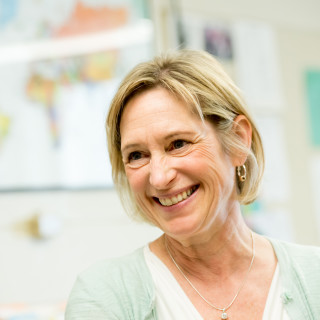 Mary Gugenberger, Killington Elementary School’s principal, relishes being active and taking on challenging terrain in the outdoors regardless of the season or time of day.  In the winter months after school, she often skins up Pico Mountain and then as darkness ensues, dons her head lamp and skis back down the mountain.  In the spring, summer and fall she is ensconced in cycling and hiking and participates in the Long Trail Century and the Kelly Brush Foundation bicycling events.

“Mary is a healthy lifestyle leader who truly leads by example and subtle encouragement,” said Jodi LeBrun, the kindergarten teacher.  “While walking with her one day, I was telling her about muscle pains while running and the next thing I know she dropped off electrolyte tablets for me to have before my next run.”

“I am in my second year as the school’s wellness leader and Mary is such a great support and proponent of all the events and ideas we present. She attends boot camp at least twice a week bringing her clothes to change into quickly following a meeting or writing grant proposals,” said LeBrun.    “She is a wellness rock star. “

“Mary encourages us to make healthy lunch and snack choices, not by telling us what to eat but by providing us with healthy choices during in-service days,” said LeBrun.  “She prepares a tray of foods for us to make our own salad or sandwich, beautiful veggies, water and seltzer.  Mary brings in her own wonderful meals for lunch making use of several recipes from a running magazine and other healthy recipes sites.”  On the day we visited, Gugenberger had put together a salad consisting of lettuce, cauliflower, avocado, feta cheese and pumpkin seeds. “I often eat foods such as oatmeal, quinoa and dates at breakfast,” she said.

Gugenberger is committed to the outdoors for herself, her family members and for her students.  “I grew up in the outdoors,” she said. “We would eat breakfast as a family, do our chores and then stay outside until dinner was ready.”  Her commitment to the importance of outdoor play was fully evident. A young boy popped into her office and handed her rules for Four Square. “He is new at this school and asked if we could play Four Square,” she said.  “I agreed provided we had rules and then pointed out the freshly painted squares as we walked outside. Several children were engaged in climbing and sliding on the wooden playground while the older students were in the midst of a serious game in the gaga pit.

Gugenberger has had a multifaceted career.  Following college, she first worked at the Killington Mountain Resort. She became intrigued with teaching children after working as an ELF (Environmental Learning for the Future) volunteer at local school.  She subsequently changed her career direction and became an educator and then principal of Christ the King school before scrambling up the mountain to serve as Killington’s principal.